Why is it “Sherbert” and not “Sherbet”?

Black Sherbert is not your average Sherbet.

What’s with the one name? You think you’re special or something?

I legally changed my name when I was 15 for personal reasons having nothing to do with Black Sherbert.

Suffice it to say that sometimes in life, drastic measures are required to break away from truly destructive people and mindsets.

Who are the Avatars? 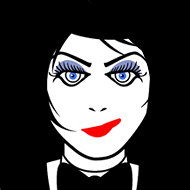 That strange smile on Lisa's lips isn't for you. It's her own satisfaction that comes from a well managed rage. Only the resurrected understand why that's worth a smile.

Nobody, nobody, was tender and trusting as she was. But people like you abused her and forced her to change.

Lisa represents evolved, controlled rage. Her story is one of rage turned inwards because she was raised to be nice at all costs (even when being abused). She was raised to support the ideas and lives of everyone but her own self. The rage is what saved her because it was accompanied by a strange clarity. She no longer has the ability to lie to herself about the people in her life.

She doesnt hide from her discontent, she serves it. 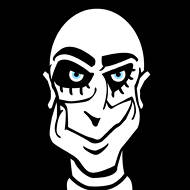 Twisted is a word that comes to mind when describing Dav. However, Dav is twisted in the best of ways. Twisted enough to have rung out the prescribed ideas that used to suffocate his soul.

Reality denied comes back to haunt.

Dav represents the fallen faithful. He allowed faith (hope) to overrule reality. He didnt understand that this blind faith was an underground bunker used to hide away from the unpleasant complexities of life. From the crumbling of false hope came disillusionment. From this came a freedom from what's "supposed to be" and a walk towards the Is.

He doesnt hide from his discontent, he serves it.

Why is Dave's name repeatedly misspelled?

If you're spelling it Dave, you're misspelling Dav's name.

You can find out more about which cookies we are using or switch them off in settings.

This website uses cookies so that we can provide you with the best user experience possible. Cookie information is stored in your browser and performs functions such as recognising you when you return to our website and helping our team to understand which sections of the website you find most interesting and useful.

Strictly Necessary Cookie should be enabled at all times so that we can save your preferences for cookie settings.

If you disable this cookie, we will not be able to save your preferences. This means that every time you visit this website you will need to enable or disable cookies again.